“Evolution is a process of creating patterns of increasing order….I believe that it’s the evolution of patterns that constitutes the ultimate story of our world. Evolution works through indirection: each stage or epoch uses the information-processing methods of the previous epoch to create the next.”

Much like the hippies, the hepcats, the mods, hipsters, flappers, etc., the culture of the constitution and the work ethic, of the social etiquette and clearly defined boundaries, the impunity of bloated, over-regulated bureaucracy and the absence of accountability are on its way out. 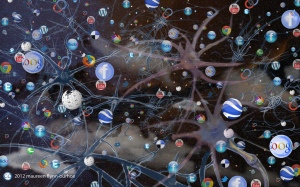 Welcome to the electronic culture.

Science fiction writers forewarned of this inevitability for years. Although, we cowered and enjoyed the show heed was not paid. Now, the ideology that one must work hard at one’s career in order to reap the most benefit from the American Dream no longer applies.

The incoming culture does not seem to want the promising career, as they understand that the dream has popped. Go to school, graduate with your [enclosed] classroom mates in a building on a stage; go to college, work for more money to afford necessities, graduate in an old-fashioned building in uniformity and lockstep. Then get a job, pay your student loans, work until retirement, pay your taxes to The Man, pay into social security, get a mortgage and a family, start accumulating debt, do this for 30-40 years and retire. . . broke and sick. This is not an American dream it is a nightmare. 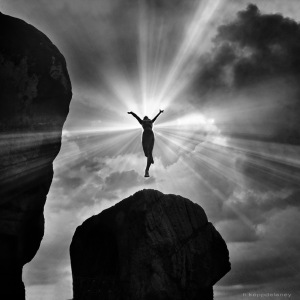 The incoming culture seems to embrace a familiar, yet, new and improved for the 21st century paradigm as well as advocating a simpler, less regulated lifestyle. Social morality and responsibility that seems to have been inspired by Kohlberg’s scale of moral development, post-conventional level has replaced conventional social roles, norms and mores of daily behavior.

Economically in the upcoming culture, quality is far more valuable than quantity. Quantity is synonymous with junk, but junk that can be cheaply modified into a quality product. Shopping for quality, the most return (worth) on a single item, or purchasing in bulk to save money seems to be favored over mass-produced products planned for obsolescence. As shopping malls along with other box stores close, much more informed shopping waits in the wake. Now, a desired item can be price-compared across the planet with an easy Google search. The best quality items can be bought to exact and personal specifications for a small price; even a car, land and home can be purchased this way. Much more productive and constructive actions can be performed online at home, than can be accomplished by, at or in many obsolete jobs of the outgoing culture.

Thrift shops offer many name brand fashions at 70%, 80%, 90% off the regular price, leading to the understanding that you can look sharp at pauper’s prices. Eating healthy: the adage You Are What You Eat seems to have gripped the public imagination (or at least the media’s).

Further, the incoming culture seems much more informed than the outgoing culture. As the incoming culture becomes more wise to the wiles of social engineering—as that culture having grown up on the internet uses social engineering for practical jokes and pranks—media like FoxNews ceases to be the sole source (or even preferred source) of current events around the world. The internet serves as a much more organic and dynamic source of current events, like the rise of Twitter as a relevant and reliable news source. The heroes of the incoming culture do not include the founding fathers, but such instantly recognizable figures as Bill Nye, MythBusters, Carl Sagan, Charlie Bukowski, Bill Murray, zombie apocalypse, and the unending fleet of viral memes like Antoine and, recently, Homeless Kai. 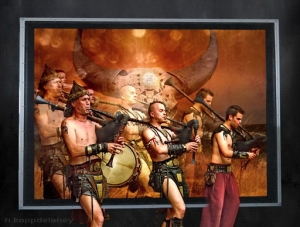 God and organized religion have been fired as even FoxNews shows the glaring hypocrisy contained therein. Now, genuine and sincere acceptance (rather than tolerance) for anyone to be who they want to be as long as no harm becomes another is the mantra of fellow humans (see the new niche, Random Acts of Kindness). Religion (and to some degree science—see noetic sciences) has evolved to interdisciplinary perspectives that combines science, the esoteric and occult, and the mystical.

itself (i.e., when one of the outgoing culture exits stage left), but are satirizing, criticizing, scrutinizing, and parodying the game. They know and understand the lingo and jargon and they have hawk eyes that see through the drivel. Creativity abounds and is nourished (oddities are accepted and oftentimes poached by corporations).

The status quo of the outgoing culture has ended, supplanted by the incoming culture and their more eastern-influenced and indigenous ideals. The new maxim might become “Come One Come All, Just Don’t Be A Douchebag”.

“Each epoch continues the evolution of information through a paradigm shift to a further level of ‘indirection.’ (That is, evolution uses the results of one epoch to create the next.)”

Image Credits (all used with permission through CC license)–
(in order of appearance)
“Planet 8000 background” by Courtney Rhodes
“Web 2.0 Digitage 2012” by Maureen Flynn-Burhoe
“Euphoria” by HartwigHKD
“Eole Airlines” by Eole Wind
“From another dimension” & “Dematerialization” by HartwigHKD
“TL;DR” by Skinned Mink

PART I – Origo
The Machine Delivered me to Labor, the Wizard certified my soul. Mommy proffered me to the devil, Paperboy declared me sold. They said, “There’s a light in the tunnel, follow it until you get to the field. Report to the man in the tollbooth, he’ll give you your assignment to kill.”

At the tollbooth, the Man threatened, “You see your life won’t be easy, you gotta toil to get by. You’ve a promised Debt to society and when you’ve paid in full you can die.”

I thought, “What do you mean I can die? Toiling in my life to get by? I was only born a moment ago; no, I’ve got my own plans in mind.”

I looked out across the field to see how many had bought this crooked line. I saw thousands and thousands of backs in the sun, bent with their noses to the grind. The Man walked up behind me and invoked leerily into my ear, “Look here don’t give me no trouble,” said the man with the gun in his hand. “Such ideas here are forbidden, it’s the Law to shoot you where you stand.”

Puzzled, I found a spot in the field and planted my feet in the ground. While I waited to see what should happen, I occupied my mind with the sound of spirits racing by unimpeded. I wondered, how could I survive? I questioned empty eyes, saw they were hopeless and slowly the years crept by. . .

PART II – Liberatio
Now, 30 years old, a lifetime to go, it’s been hard getting by. I’ve been beaten and bruised for my reason. In silence, I Liberate my mind. I looked ahead to the evening and a dawning of a new age. Of toiling no more for the Giants and freedom to all those engaged. So, I threw down the plough and I shouted, “You’ll no longer have the abuse of me!” I ran for the edge of the field, but before I got there I was knocked to my knees. I felt the mighty hand of an Agent and at my back pressed cold hard steel. “You see, you can never escape from Duty so Forget all your insane ideas,” he dripped onto my head as I kneeled. “Freedom? No such thing here exists. Never has there been in all time. So return to your post and your toiling or you risk the firing line.”

I intoned, “One day I know I shall be free, because I can see beyond the Horizon. A storm fast approaches along your path and you’ll have all the fear when it comes.”

Angered, I found a spot in the field and stood my feet on the ground. I waited to see what would happen, my mind humming with the sound of spirits racing to my aid. I heard something say ‘You have nothing to fear: Soon all your questions will be answered, your days aren’t much long here’ . . .

the dream
that night I closed my eyes to sleep and awoke walking on a black road of dreams. I saw a dragon flying through a wilderness of herds, an eagle on the wind and a lion rose from the sea. From a cloud appeared a rumbling light; out of the light came a stranger of Being and spoke. “Be not afraid, we mean you no harm, we know what wonders your heart seeks. We’ve watched you since the day you were born and knew you before you were formed. We’ve come to answer your tears, below the Time of Harvest is in the fields.”

the Stranger laid a hand upon my forehead and left a mark, I was full of Light. “Careful,” it prophesied, “they’ll search for you come mourning. Awake now, you’ve no more need to hide.” 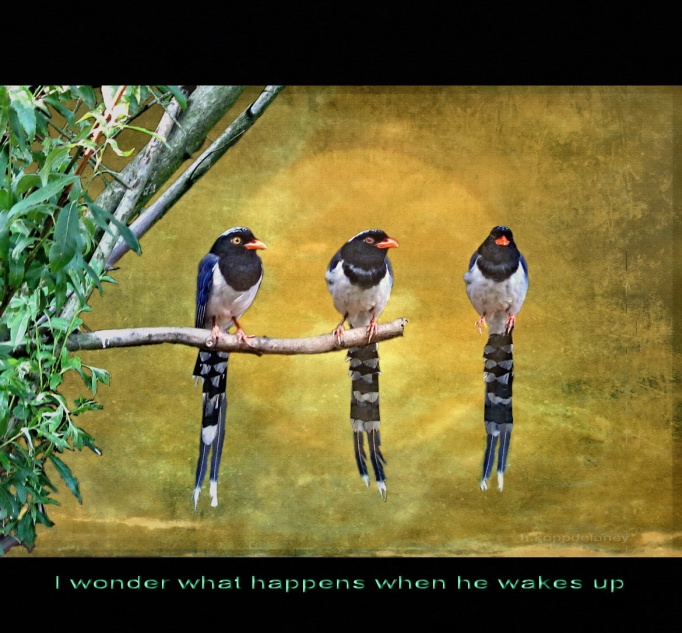 PART III – Novae Res
With the Dawn, I awoke to sirens and realized the search had begun. I was not afraid; I stood my ground, as I was tired of life by the gun. In my mind sat the strength of clarity and I turned to face the empty-eyed army. I was stampeded, but I was not done: this war I will fight until it’s won. Should I fail? I’ve nothing left to barter, I’ve got no more of me to sacrifice. Next came, an Army of Agents. “I am Come to reveal all your secrets!” I yawped.

Inside me I felt the Archives of Reason written on the code of my life. From my mouth came the outflow of Truth and the Tempest rode the back of sun’s rise. Sensing the end the people scattered but the storm plucked them up from the earth. Agents gave up weapons and their last breath and were carried away by a hurricane of death. I saw Giants fall from their great thrones and crawl for cover beneath ash and bone. The Storm chewed them up as a feast and from its throat, it vomited a beast. Lightning struck the beast on its eye and from the sky, it fell with a quake. The earth opened up and swallowed it whole. The Tempest broke, and left not stain. Amazed I stood at the edge of a garden beckoned by the lull of a Stranger’s tune. I laid my hand upon the gate to enter and knew my search would end soon. . . 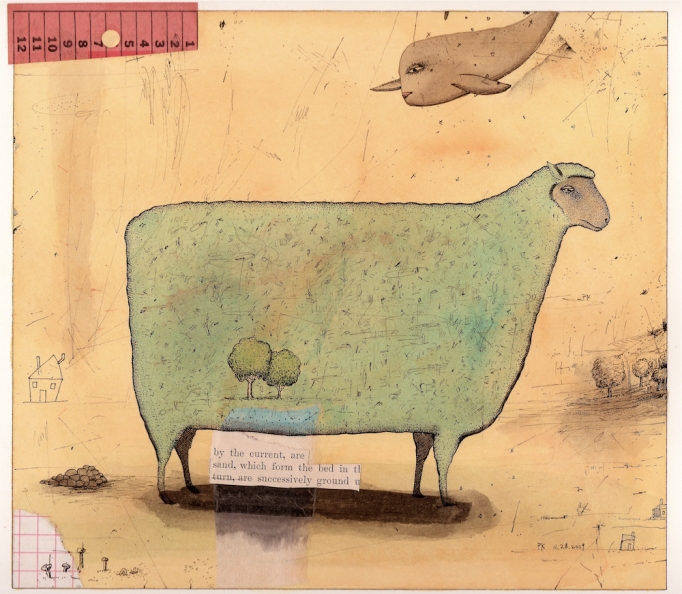 EPILOGUE
My mind buzzing with the spirits of conscience, I knew this was one of but many directions. The door to the line of Evolution stood open; I crossed the threshold to the birth of new questions.